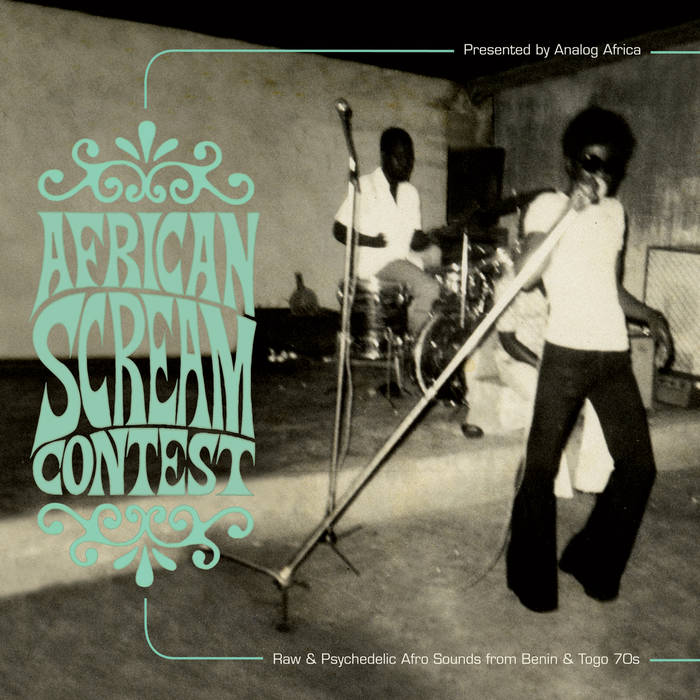 Nathan Howard We need more stuff like this in the world. Favorite track: It's a Vanity.

Scott Lots of passionate groovy fun. The liner notes with the LP are a good read, too. Favorite track: Djanfa Magni.

Palma Ltd The Beginning and The End. I still haven't gotten a straight answer as to what the hidden track is called or who performs it, but it's by far the best selection in the comp. Essential. Favorite track: Oya Ka Jojo.

'African Scream Contest' is the third release by the Analog Africa label. The project initially took off in August 2005 when label owner and vinyl collector Samy Ben Redjeb arrived in Cotonou, Benin, 'without any special expectations, just hoping to lay my hands on few good records - what I found in the process cannot really be described in words'. This first trip was followed by eight more to the region. Thirty months and few thousand records later Analog Africa proudly presents this 14-track compilation.

Just like with the label's first two releases - albums by Zimbabwean 70s bands the Green Arrows and Hallelujah Chicken Run Band - the essence of Analog Africa is clear yet again: searching in dusty warehouses for forgotten music to keep it alive. Ben Redjeb explains: 'Some of the track we've already released would have been lost for ever if we didn't do it. With 'African Scream Contest' this is even more the case as some of the bands and musicians were, and still are, completely unknown. Some of the tracks have not even been released and I found a lost master tape at the producer's house who decided not to release it and just left it aside.' (The compilation contains a track by Vincent Ahehehinnou & Poly-Rythmo which wasn't even released in Benin.)

All the tracks have been officially licensed, usually from the artists who Ben Redjeb also met with for detailed research. He conducted 16 interviews in various cities in Benin and Togo with artists, producers and sound engineers to reconstruct the history of the 70s music scene for the 44-page booklet which also includes many rare photographs directly received from the artists.

Like most modern music in French-speaking West African countries, the music of Benin and Togo was influenced by a few main musical currents: Cuban, Congolese and local traditional music, as well as Chanson Francaise. Additionally, the geographical location of Benin and Togo - sandwiched between Ghana and Nigeria - exposed Beninese and Togolese musicians to Highlife music.

The cultural and spiritual riches of traditional Beninese music had an immense impact on the sound of Benin's modern music. Benin is the birth place of Vodun (or, as it is known in the West, Voodoo), and some of the rhythms used during traditional rituals - Sakpata, Sato, Agbadja, Tchenkoumé and many others - were fused to Soul and Latin music as early as the mid-1960s and later to Funk. That fusion is the essence of this compilation.

In the late 60s and early 70s rock and soul music started creeping into the region. In particular, the music of James Brown and Johnny Hallyday became immensely popular with university students. It was then that the music scene in Benin really started to take off.

What made this musical revolution even more interesting is that most of the musicians could not read music. Often the music they made sounded one semi-tone away from being out of tune, but somehow they always managed to bring all the elements together into something new and exciting.

One of the greatest bands of their era, Orchestre Poly-Rythmo de Cotonou, who are of course featured on this compilation, took the Afro sound to another level by showing their musical versatility in many forms. Although they were consciously copying western artists, they would always inject a dose of psychedelic Afro grooves that would make their music unmistakably Beninese. Their biggest song, 'Gbeti Madjro' is believed to have revolutionised the music industry in Benin in the 70s when the country went through a period of political turmoil. The song is full of raw breaks and the hypnotic rhythms as well as screams à la James Brown - after this song many bands in Benin started screaming on their recordings, hence the title of this compilation.

Latin-influenced sounds are present on this compilation, too. Ouidah, a city on the Atlantic coast of Benin, is home to a large Brazilian community, or, as they are called in Benin, 'Agoudas.' Members of that community are descendents of slaves who returned from Brazil at the end of the 19th century. Their dances (such as Kaléta and Buriyanj) and songs are still being performed and fused into the traditional Beninese rituals. That, too, can be heard in modern Beninese music.

The proximity of the giant neighbour Nigeria can be heard on the track 'Djanfa Magni' which features the amazing trumpeter/ saxophonist Tidjani Koné fronting the Orchestre Poly-Rythmo. Koné whose career started in Mali as the founder and band leader of the Rail Band de Bamako, had played with Fela Kuti for a short while hence the strong Afrobeat influence.

There are countless stories to be discovered in the extremely well-researched booklet and the music is truly mind-blowing. So delve into the forgotten raw and psychedelic Afro sounds from 70s Benin and Togo and experience the African Scream Contest.

If you like African Scream Contest - Raw & Psychedelic Afro Sounds from Benin & Togo 70s, you may also like: