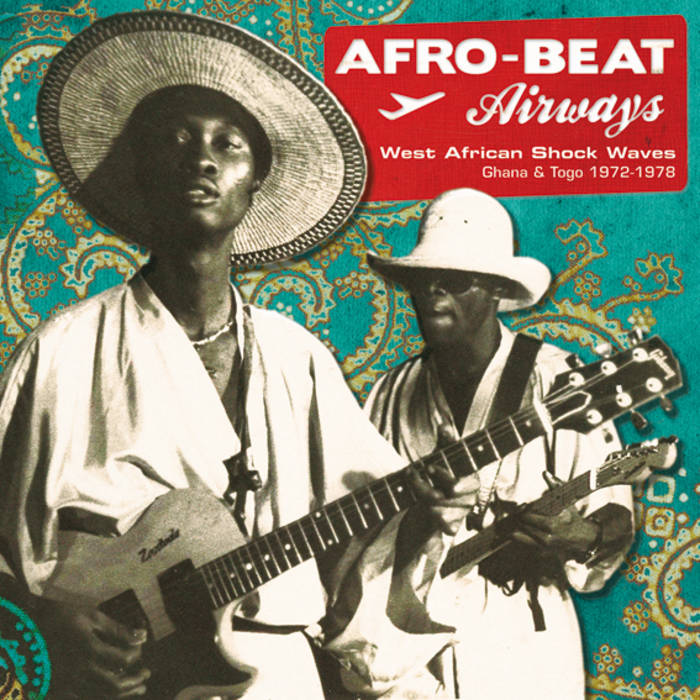 Scott It's just ridiculous how many of the past year's "latest favorite songs" have been from Analog Africa collections. This song by De Frank Professionals leaves all the others eating its dust. Favorite track: Afe Ato Yen Bio.

Chris This compilation is one of my all time favs. It blew me away the first time I listened to it and I have loved it every time since. The music feels fresh, beautiful and alive. The sequencing is great and the presentation immaculate. I've had the CD for years, but have just decided to pick up the vinyl.

thierrymi Great compilation of funky west african grooves , now i want to ask big favour to analog africa : Please release the early album of Gyedu Blay Ambolley it could not get any more funky than that !! Favorite track: Ma Nserew Me.
more...

Organ-driven Afro-beat, cosmic Afro-funk and raw, psychedelic boogie… just some of the flavours to be found on this highly danceable compilation by Samy Ben Redjeb, founder of Analog Africa.

No effort has been spared! To document these 15 irresistible tracks and the music scene from the'70s, Samy crisscrossed the lengths of Ghana and Togo in search of the producers and artists - or their relatives. In the process he recorded a dozen interviews, scanned 90 pictures and transferred 120 master tapes. All the evidence can be seen in the 44-page full colour booklet accompanying these 75 minutes of heavy West African sounds. Afro-Beat Airways showcases an amazing diversity of local rhythms spiced with Afro-American funk, soul and jazz.

Samy Ben Redjeb, in his own words:

'Somehow this project started at Frankfurt airport when I accidently checked in the bag which contained my passport. The flight to Angola (via Addis Ababa) was delayed and the plane's belly emptied in an attempt to find my luggage. Unfortunately, this was never found. As a consequence, I had to cancel my trip. I was at the Ethiopian Airlines offices the next morning (where this episode had become legend) trying to rebook my flight to Luanda, but everything was fully booked for weeks. I was told that if I wished I could selected another destination. The choices? Kinshasa, Yaoundé, Lagos and Accra. I selected the last, because my connections in Ghana had found some serious stocks of vinyl records, and I thought it might be the occasion to check them out.

A few days later I'm in Ghana, and as on all my previous trips to Accra the first person I paid a visit to was producer Dick Essilfie-Bonzie, who I simply call Mr Essiebons, after his legendary label, Essiebons Records. Everything happens for a reason because the disappointment of missing my flight to Angola was soon replaced by excitement. Mr Essiebons explained that after more than a decade of being out of business he had decided 'to give it another shot' and thus digitised all his master tapes for future releases. He then showed me the result - a box containing approximately 80 CDs, each with a track listing, - a total of 800 songs. I was allowed to take the 'surprise' box to my hotel room and started listening. I had no idea what to expect, but I was in for a treat. Previously unreleased material by Apagya Show Band and Orchestre Abass were the first few amazing tracks that I discovered and that's when I decided to start working on this compilation.'

The whole selection of songs was completed about a year later and now that I knew which tracks were going to be included, I decided to dedicate some time to find the artists for interviews and research. December 2008 and May of 2010 were solely dedicated to that process, as I flew to West Africa to meet Rob, Ebo Taylor, Nana Ampadu (founder of the mighty African Brothers Band), Issac Yeboah (lead singer of Vis-a-Vis, one of Ghana's most impressive bands), Gyedu-Blay Ambolley (the personification of Ghanaian Afro-funk), saxophonist Ray Allen, Chester Adams (lead singer of the Uppers International) and few others. I did extensive interviews with all of them and managed to collect amazing pictures to document the liner notes that accompany the music.'

'While some light has been cast on the Ghanaian music scene of the 1970's, Togolese music is relatively obscure and badly documented. However, we are working on this! In fact, we've already made a start, with our previous Analog Africa compilation 'African Scream Contest' which showcased 3 Togolese artists. Afro-Beat Airways presents two more - Orchestre Abass and Cos-Ber-Zam. While the first band developed into one of the country's best, to such an extent that none other than Fela Kuti once offered them a contract to play at his Afro-Spot night club (which later became The Shrine), the second artist was a one-hit wonder. 'Né Noya' was a monster hit in Togo but it is to date the only release by this obscure artist. The reason why I decided to include these Togolese tracks on this compilation is that they were all recorded in Ghana and thus they worked well in the mix.'

These tracks have been hiding for 30 years and as you will hear these are modern African sounds created to stand the test of time. Afro-Beat Airways is like a time capsule, and promises to take you on a fascinating musical journey through West Africa's vintage Afro Sounds.