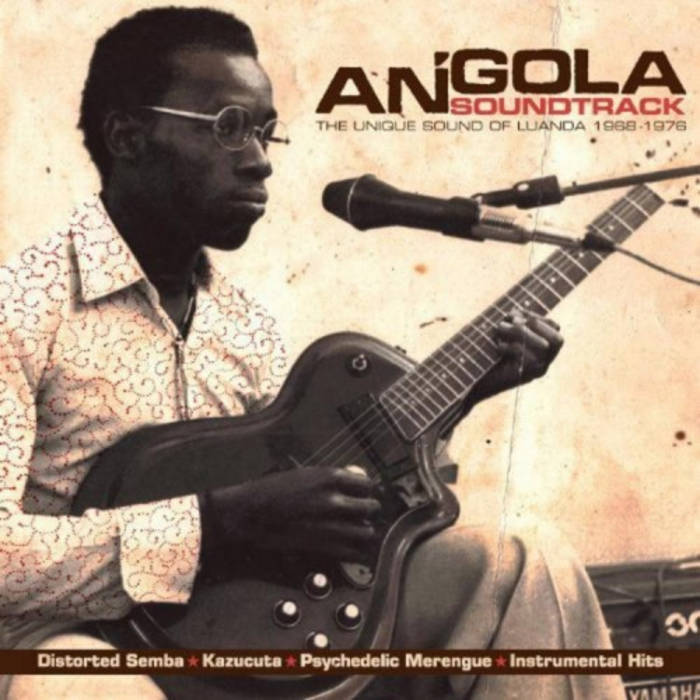 Tom Studdy Deep, rich and rhythmic music that will never get old. Analog Africa is a blessing for music lovers with an open mind.

The nascent Angolan music scene was set on fire by a small group of intrepid singers, backed by an array of super tight bands and led by extraordinary guitarists who revolutionized the musical and the political panorama of the 60s and 70s. A powerful confluence of traditional rhythms from Luanda's islands, psychedelic guitar sounds imported from neighbouring Congo, Latin grooves, old school Caribbean merengue and the hard beat of the angolan carnival bands conspired to create the modern music of Angola. These sounds were immortalized by two excellent recording companies - Fadiang (fábrica de discos angolano) and Valentim de Carvalho.

The great electric bands of Angola were a well kept secret until the late 90s when France-based music label Buda Musique released a short-lived series of Angolan music compiled by Ariel de Bigault. Inspired and taken aback, the releases proved to be a pivotal juncture for Analog Africa's founder Samy Ben Redjeb:

Listening to Angolan music suddenly became part of my daily life and when my label was founded a few years later, the idea of releasing an Angolan compilation was never too far away from my mind.

From the nine Analog Africa releases thus far, Angola Soundtrack has been the most difficult to create. The travel visa was in itself a struggle and logistically and financially, Luanda is a nightmare. After two unsuccessful years, I eventually found shelter at a home in Prenda, a musseque (township) outside of the capital. I had come to this former Portuguese colony to meet my favorite Angolan musicians, to convey my ineffable love for what they have created as well as license some of my favorite tunes for my label while documenting their story.

I had no idea what to expect from the trip - more than once I was told that I should expect complicated situations, and if I thought I knew Africa, I should wait until I experience Luanda. I was prepared for the worst. To my surprise I encountered an amazingly positive vibe and, except for heavy traffic jams and high costs, I am entirely grateful of my Angolan experience.

With the support of Zé Keno, the legendary guitarist of Jovens Do Prenda, I managed to meet most of the composers of the tunes presented here. The anecdotes they provided are numerous:

Boto Trindade, guitarist of Os Bongos, abandoned his dream of becoming a football player to support his brother ́s family by earning money as a musician. A very young Zé Keno went to see his favorite guitarist Marito performing with Os Kiezos and consequently built a three string guitar only to become one of the most sought after guitarists in the country a mere few years later. Those are just an appetizing dose of the anecdotes presented in the 44-page booklet that comes with this compilatioc.

Although the licensing fees I paid were an inadequate deal for Angolan standards, it didn't seem to matter as much to the artists as the earnest request of 'Take our music abroad', something that will hopefully be fulfilled with this upcoming release.

Angolan music is truly unique and stands on its own as a sound that can only be found in that part of the world. Rhythms such Rebita, Kazukuta, Semba and Merengue, all of which are presented in this latest compilation, might be unfamiliar but they are superbly melodic, highly danceable, hypnotic, raw and quintessentially beautiful and totaly addictive. If given the chance, you will undoubtedly be riding grooves that shall guide you through an unforgettable melting pot of moods from a people glistening with musical prowess.