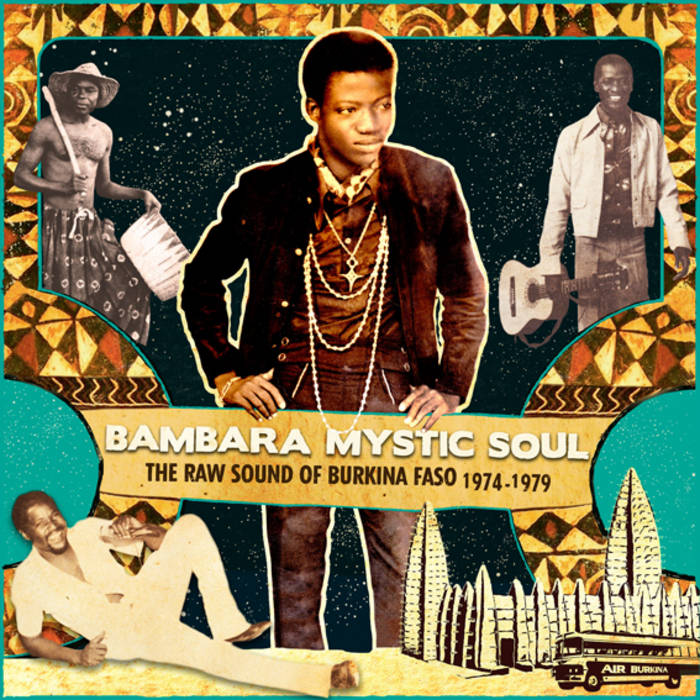 Markus Bader The one bad thing after receiving two CDs from Analog Africa: I deply feel I have to invest a little more in these compilations in the future. I recommend the CDs with their lovingly illustrated booklets. The music itself is a treasure I honour deeply and will listen to again and again and... Favorite track: Renouveau.

Tom Studdy Raw Afro sounds from one of the best Tropical labels around.

For its commemorative 10th release, Analog Africa indulges in Burkina Faso, one of the jewels of the Sahel, a harsh and arid strip that straddles the southern Sahara, stretching from Dakar in the west to Djibouti in the east. Formerly known as Haute Volta, Burkina Faso's sound was organized and nurtured during the country's time as part of a vast patchwork making up French colonial West Africa.

The rise of a post-independence urban middle class willing to invest in the Burkinabe arts spawned a cadre of singers, bands, orchestras and, most importantly, competitive record labels who all played their part in ushering in a golden age of music in their landlocked nation during the 1970's - a decade marred by political instability in the country and an era of artistic enlightenment empowering the whole of Africa.

The Sahelian climate fortunately bore no influence on the Burkinabé sound, which is cosmopolitan as it was raw. West Africa was and continues to remain deeply interconnected. In search of better gigs, well-to-do producers and sufficient recording equipment, Burkinabe musicians ventured across the surrounding region, returning home with a wealth of knowledge of their neighbors' distinctive styles.

The raw sound of Burkina Faso combined Afro-Funk, traditional Islamic rhythms and subtle Afro-Latin sounds brought over by visiting Cuban ensembles. Mandingue melodies and guitar techniques from Mali and Guinea, however, were by far the most defining traits of a potent African mix that distinguished the Voltaic style between 1974 and 1979.

Beginning with L'Harmonie Voltaique and Super Volta (both featured in this compilation), the pioneering orchestras from the capital Ouagadougou, several groups followed suit. Regional orchestras outside of the capital proudly boasted the contemporary sound through ensembles such as Echo del Africa National and Volta Jazz, and exported much needed skilled musicians back to the capital.

Record labels across Burkina Faso sprung up to capture the newly born mystic and soulful sound taking over the country. Volta Discobel and Club Voltaique du Disque (CVD) emerged in 1974 and competed for the modern music of their people. Despite its humble beginnings as a record shop, CVD came to dominate the industry. Both labels worked with the heavyweights of the time, such as the majestic Amadou Ballaké, a national icon who is featured extensively on this compilation.

By the mid 70's, Ouagadougou had become a hotbed for African music, filled with touring bands, gifted instrumentalists and hypnotic vocalists. Talent was abound, to say the least. Bamogo Jean Claube, the founder of Afro-Soul System, went from being a 'musician's tailor' to a celebrated singer. Ballaké himself jumped from job to job before being recognized for his graceful voice.

While it might be Analog Africa's venture into possibly the most obscure of African sounds thus far, the sounds of the golden age of Burkinabé music deserve to be heard and the varying styles that came to define the era are completely covered in this 16-track release due on October 10, 2011.

Five years since its foundation, Analog Africa has successfully organized the first-ever European tours for Colombia's Anibal Velasquez and Ghana's Ebo Taylor as well resurrecting the force that is Benin's Orchestre Poly-Rythmo de Cotonou, amongst others.