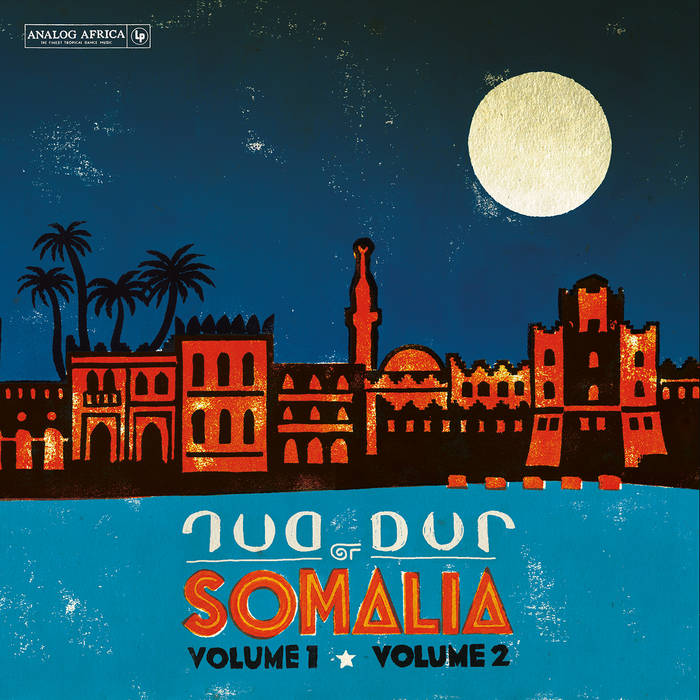 The Defenestrator Just a note that I’ve had this in rotation since I bought it. I love finding these little micro-genres of awesome music. Thank you, Analog Africa, for taking the time to dig these up! \m/ Favorite track: Ohiyee.

taooftheboz What a groove! A testament to impeccable musicianship. A blessing to have these extant recordings for future generations to enjoy! Favorite track: Doon Baa Maraysoo.

When Analog Africa founder Samy Ben Redjeb arrived in Mogadishu in November of 2016, he was informed by his host that he would have to be accompanied at all times by an armed escort while in the country. The next morning, a neighbour and former security guard put on a military uniform, borrowed an AK-47 from somewhere and escorted him to Via Roma, an historical street in the heart of Hamar-Weyne, the city's oldest district. Although previous Analog Africa releases have demonstrated a willingness to go more than the extra air-mile to track down the stories behind the music, the trip to Mogadishu was a musical journey of a different kind. It was the culmination of an odyssey that had started many years earlier.

In 2007 John Beadle, a Milwaukee-based musicologist and owner of the much loved Likembe blog, uploaded a cassette he had been handed twenty years earlier by a Somalian student. The post was titled 'Mystery Somali Funk' and it was, in Samy's own words, "some of the deepest funk ever recorded". The cassette seemed to credit these dense, sonorous tunes to the legendary Iftin Band. But initial contact with Iftin's lead singer suggested that the 'mystery funk' may have actually been the work of their chief rival, Dur-Dur, a young band from the 80s.

Back then, Mogadishu had been a very different place.
On the bustling Via Roma, people from all corners of society would gather at the Bar Novecento and Cafe Cappucino, watch movies at the famous Supercinema, and eat at the numerous pasta hang-outs or the traditional restaurants that served Bariis Maraq, a somali Beef Stew mixed with delicious spiced rice. The same street was also home to Iftinphone and Shankarphone, two of the city's best known music shop. Located opposite each other, they were the centre of Somalia's burgeoning cassette distribution network. Both shops, run by members of the legendary Iftin Band, would become first-hand witnesses to the meteoric rise of Dur- Dur, a rise that climaxed in April of 1987 with the release of Volume 2, their second album.

The first single 'Diinleya' had taken Somalian airwaves by storm in a way rarely seen before or since. The next single, 'Dab', had an even greater impact, and the two hits had turned them into the hottest band in town. In addition to their main gig as house band at the legendary Jubba Hotel, Dur-Dur had also been asked to perform the music for the play "Jascyl Laba Ruux Mid Ha Too Rido" (May one of us fall in love) at Mogadishu's national theatre. The play was so successful that the management had been forced to extend the run by a month, throwing the theatre's already packed schedule into complete disarray; and each night, as soon as the play had finished, Dur-Dur had to pack their instruments into a Volkswagen T1 tour bus that would shuttle them across town in time for their hotel performance.

The secrets to Dur-Dur's rapid success is inextricably linked to the vision of Isse Dahir, founder and keyboard player of the band. Isse's plan was to locate some of the most forward-thinking musicians of Mogadishu's buzzing scene and lure them into Dur-Dur. Ujeeri, the band's mercurial bass player was recruited from Somali Jazz and drummer extraordinaire Handal previously played in Bakaka Band. These two formed the backbone of Dur-Dur and would become one of Somalia's most extraordinary rhythm sections.

Isse also added his two younger brothers to the line-up: Abukar Dahir Qassin was brought in to play lead guitar, and Ahmed Dahir Qassin was hired as a permanent sound engineer, a first in Somalia and one of the reasons that Dur-Dur became known as the best-sounding band in the country.

On their first two albums, Volume 1 and Volume 2, three different singers traded lead-vocal duties back and forth. Shimaali, formerly of Bakaka Band, handled the Daantho songs, a Somalian rhythm from the northern part of the country that bears a striking resemblance to reggae; Sahra Dawo, a young female singer, had been recruited from Somalia's national orchestra, the Waaberi Band. Their third singer, the legendary Baastow, whose nickname came from the italian word 'pasta' due to the spaghetti-like shape of his body, had also been a vocalist with the Waaberi Band, and had been brought into Dur-Dur due to his deep knowledge of traditional Somali music, particularly Saar, a type of music intended to summon the spirits during religious rituals. These traditional elements of Dur-Dur's repertoire sometimes put them at odds with the manager of the Jubba Hotel who once told Baastow "I am not going to risk having Italian tourists possessed by Somali spirits. Stick to disco and reggae".

Yet from the very beginning, Dur-Dur's doctrine was the fusion of traditional Somali music with whatever rhythms would make people dance: Funk, Reggae, Soul, Disco and New Wave were mixed effortlessly with Banaadiri beats, Daantho and spiritual Saar music. The concoction was explosive and when they stormed the Mogadishu music scene in 1986 with their very first hit single, 'Yabaal', featuring vocals from Sahra Dawo, it was clear that a new meteorite had crash-landed in Somalia. As Abdulahi Ahmed, author of Somali Folk Dances explains: "Yabaal is a traditional song, but the way it was played and recorded was like nothing else we had heard before, it was new to us". 'Yabaal' was one of the songs that resurfaced on the Likembe blog, and it became the symbolic starting point of this project.

It initially seemed that Dur-Dur's music had only been preserved as a series of murky tape dubs and YouTube videos, but after Samy arrived in Mogadishu he eventually got to the heart of Mogadishu's tape-copying network – an analogue forerunner of the internet file-sharing that helped to keep the flame of this music alive through the darkest days of Somalia's civil strife – and ended up finding some of the band's fabled master tapes, long thought to have disappeared.

This triple LP / double CD reissue of the band's first two albums – the first installment in a three-part series dedicated to Dur-Dur Band – represents the first fruit of Analog Africa's long labours to bring this extraordinary music to the wider world. Remastered from the best available audio sources, these songs have never sounded better. Some thirty years after they first made such a splash in the Mogadishu scene, they have been freed from the wobble and tape-hiss of second and third generation cassette dubs, to reveal a glorious mix of polychromatic organs, nightclub-ready rhythms and hauntingly soulful vocals.

In addition to two previously unreleased tracks, the music is accompanied by extensive liner notes, featuring interviews with original band members, documenting a forgotten chapter of Somalia's cultural history. Before the upheaval in the 1990s that turned Somalia into a war-zone, Mogadishu, the white pearl of the Indian Ocean, had been one of the jewels of eastern Africa, a modern paradise of culture and commerce. In the music of the Dur-Dur band – now widely available outside of Somalia – we can still catch a fleeting glimpse of that golden age.

Forever grateful to John Beadle and his fantastic Likembe site without whom this project wouldn’t have seen the light of day. (likembe.blogspot.com)

Special Thanks to Fatuma Abdulahi for giving me shelter in Somalia, Koshin Korfa Garane for inspiration and support, Abdulkadir Sheikh Ali Maye “Shacalow” for such a masterful tape digging job. To Shimaali, Baastow, Ujeeri, Abdinur Daljir and Liban Noah for providing an inside look into Somalia ́s musical culture and supporting me with the reconstruction of Dur-Dur Band ́s biography.