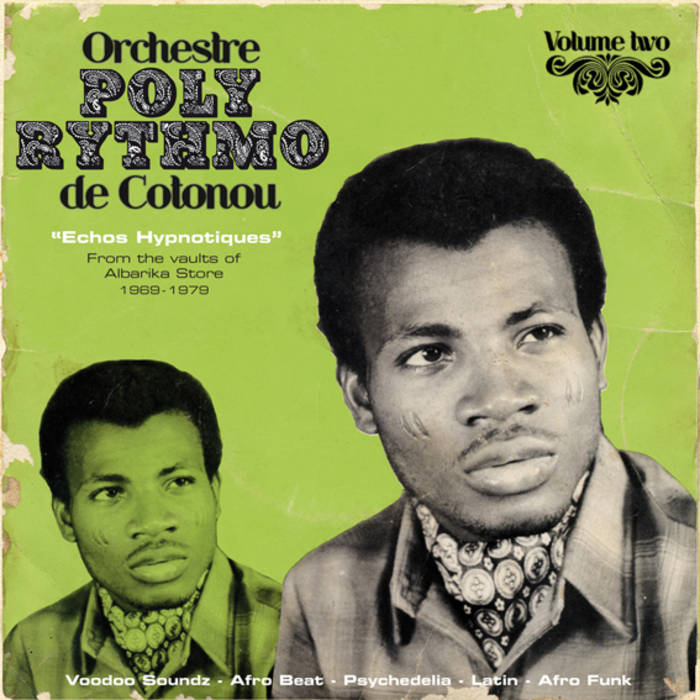 Frank Eijsvogels A record that has a special place in my heart. Breathtaking. An absolute masterpiece.

Jonathan Clarke Simply some of the best music ever made

'The riches of Vodoun rhythms are of such magnitude that one would never get to the bottom of it - we've tried.' Vincent Ahehehinnou - lead vocalist of Orchestre of Poly-Rythmo

Four years in the making, Analog Africa finally presents the second volume of Africa's funkiest band, the mythical Orchestre Poly-Rythmo de Cotonou. Volume One (The Vodoun Effect - Funk & Sato from Benin's Obscure Labels, 1973 - 1975), released by Analog Africa at the end of 2008, was a collection of amazing lo-fi recordings produced for various labels around Benin. Volume Two showcases superbly recorded tracks, courtesy of the EMI studios in Lagos, Nigeria, one of the best studios in the region. All tracks here were recorded for the mighty Albarika Store label and its enigmatic producer, Adissa Seidou.

The idea for this compilation was born five years ago when Samy Ben Redjeb, Analog Africa's founder and compiler, first heard the addictive funk track 'Malin Kpon O' (included here), which was originally released in 1975 on Albarika Store. That discovery triggered the compiler's curiosity and what followed was a long journey through the musical history of Benin and the history of its most important ambassador, Orchestre Poly-Rythmo de Cotonou who started as a children entertainment group and went on to become one of the greatest bands of their era.

The four year journey involved criss-crossing Benin, Togo and Niger trying to get hold of the band's recording output which were found in record stocks and had laid untouched for a quarter of a century, reviewing reels and master tapes at the headquarters of Albarika Store, conducting interviews with all the living members of the band, searching for pictures of the Orchestre and licensing the music from the composers and producer. The result: approximately 100 pictures, 120 master tapes, 20 hours of interviews and a few hundred Orchestre Poly-Rythmo vinyl records - 500 songs in total - some of which previously unreleased.

Almost half of those tracks were recorded for Benin's number one label - Albarika Store. Fifteen out of 200 tracks were carefully selected for this compilation which comes with a massive 44-page booklet filled with amazing pictures of the band, a complete discography and a biography tracing the band from its foundation as Groupe Meloclem in 1964 via Sunny Blacks band (1965), Orchestre Poly-Disco (1966), El Ritmo (1967) and finally Orchestre Poly-Rythmo de Cotonou in 1968.

During the period presented here - 1969 to 1979 - the mighty Orchestre was without any doubt one of Africa's most innovative group. Capable of playing any style of music, the band moved from traditional Vodoun rhythms to Funk, Salsa or Afro-beat seamlessly and quickly became the powerhouse of Benin's music scene, backing most of Africa's stars touring the country, such Manu Dibango, Ernesto Djedje, Bella Bellow, as well as supporting an array of local composers, such as Honore Avolonto, Antoine Dougbé and Danialou Sagbohan.

Given the size of the tiny country one could think that Poly-Rythmo must have been too big a fish for such a small pond, but the more one understands Benin's culture and traditions the more it appears that a phenomenon such as Orchestre Poly-Rythmo couldn't have happened anywhere else. Some of the planet's most exciting rhythms are related to the complex Vodoun religion born in Benin. Those rhythms, supported by chants and dances, have been transmitted from generation to generation and are still being performed to this date, a few hundred years after they were created. The composers and arrangers of Orchestre Poly-Rythmo understood that they were surrounded by a gold mine of inspirational sounds which, if modernised and mixed in with whatever was in fashion at that particular moment, could have a strong impact on the urban population.

'Drums, bells and horns are the fundamental instruments used during our traditional Vodoun rituals. We added guitars and organs - we modernised those ancients rhythms and combined them with Western genres that were in vogue at that time'. - Melome Clement, founder and bandleader of Orchestre Poly-Rythmo de Cotonou