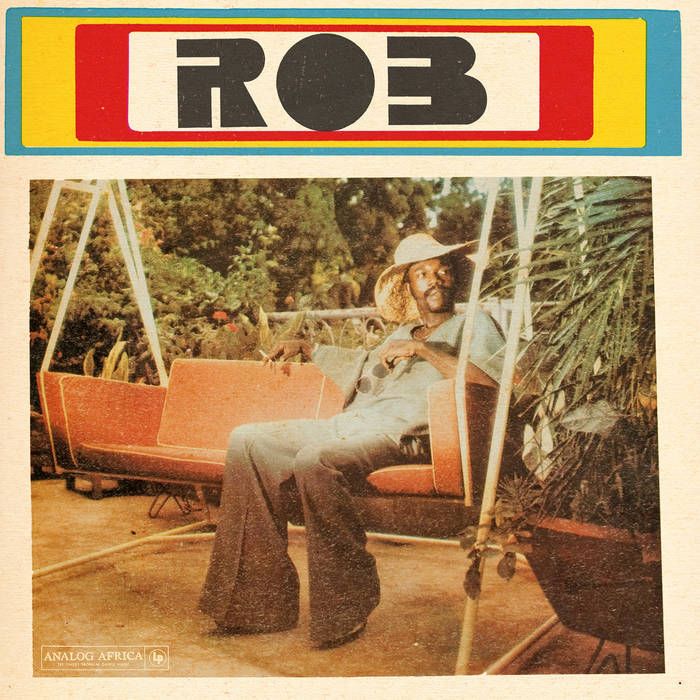 nicholas hamnett All I will say is that this album is so good I bought it twice! I couldn't not have the gatefold edition, with poster too, and, at least, if some horrid mishap occurs and one vinyl gets scratched, perhaps by a young person who thinks you can chuck vinyl about, or play frisby with it just like they do with those
awful, if convenient, CD's, i'll still have the other copy to drool over.This vinyl is already a prize possession.Its sonic and aesthetic beauty is worth all the ritual care and all the reverence any great cultural object deserves. Favorite track: More.

Andrew Jobe Been in love with this record since I first encountered it back in 2010. Finally available again on wax. Favorite track: Funky Rob Way.

"...this album is an unwaveringly infectious cocktail of slinky grooves, sultry wah-wah guitar, catchy horn hooks, and awesome percussion.  Even without Rob, this would be great, but his sheer character and presence elevates this album to "classic" status." - ***** Brainwashed

"...one of ´70s West Africa´s strangest and most fascinating albums.” ***** Dustedmagazine

Appearing out of nowhere with a bunch of twisted afro-cosmic tunes that seems to have come out of an imaginary science fiction movie, singer Rob has to be one of the most enigmatic artists to come out of West-Africa.

Rob Roy Reindorf - Born in Accra in 1947 - was an admirer of American artists Otis Reading, James Brown, Wilson Pickett and Ray Charles. He began his trade by learning the piano at a music school in Cotonou, Benin before venturing out to make what money he could by getting gigs with the movers and shakers of the Beninese music scene, namely Orchestre Poly-Rythmo and the Black Santiago. After learning the science of music composition, Rob returned to Ghana where he began to write his own songs and eventually sought the backing of a band, specifically one that had horns.

In 1977 - at the age of 28 - Rob travelled to the city of Takoradi in western Ghana to approach an army band named Mag-2 whom he had seen perform in Accra. Mag-2 had an entire section of its ensemble dedicated to horns along, some of the sophisticated music equipment available in Ghana at the time - Hofner guitars, Yamaha keyboards and the like.

Belonging to the "magnificent" second battalion of the Takoradi-based army unit, original founder Amponsha Rockson decided to aptly name the band "Mag-2". Joining the army during the 1970s was often an easy decision, particularly for musicians, since the army provided not only good music equipment but basic services such as food and medical care.  Mag-2 was essentially filled with the best elements of "The Parrots," a highlife band in which Amponsha was the lead guitarist.  Mag-2's main job was to entertain soldiers with the copyrighted top hits of the day and, with the army tour bus, perform from town to town and in hot spots in the capital.

Enticed by the innovative style of music Rob had proposed - a repertoire of cosmic, Afro-American funk-inspired progressive dancefloor sounds sung in English - Mag-2 backed the Ghanaian sensation on his astonishing first and second albums, "Funky Rob Way" and "Make it Fast, Make it Slow," both of which were recorded at Essiebons studios in Accra.  Despite Rob's training and musical education, Amponsah was responsible for the majority of the composition, such as building the chord progression and arranging the horns that Rob craved. They rehearsed for about one month with Rob providing cigarettes, food and drinks in place of hard cash.  Marijuana, though enjoyed, was forbidden in the barracks and would lead to an immediate dismissal.

Despite early successes, a once-strong interest in Afrobeat slowed down by the early 1980s and Disco Boogie rapidly became the style label owners and music producers pursued.  Rob had recorded a third album, entitled "Hellfire," licensed by Nigerian label Tabansi, who lost the original recording only to find it when the style Rob had shaped his career around was in decline.

Making good money became a big problem, forcing the cosmic funk czar to travel to Germany and Sweden before returning to Accra to open his restaurant, the Chicken Pepper, where he can be found today.