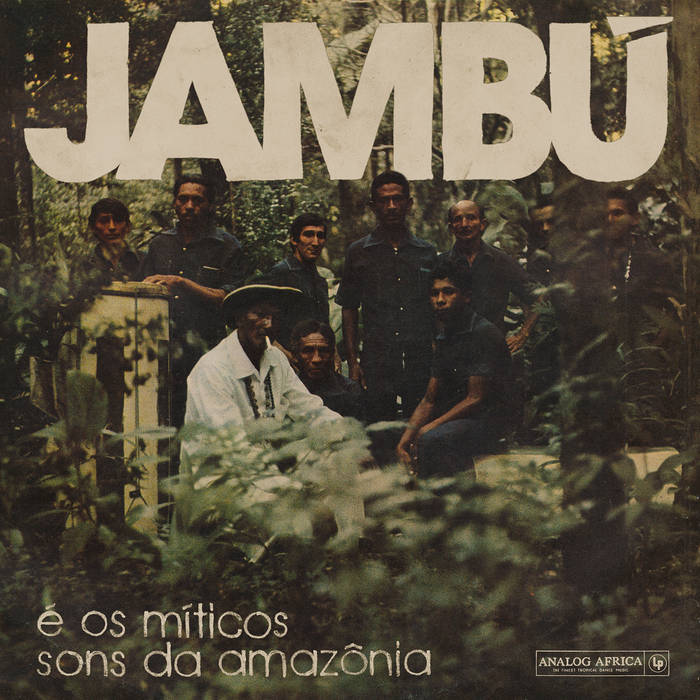 msemedo13 Amazing music, ingredients from all over the world, cooked in Amazonia! Favorite track: Xangô.

Vik Srinivasan Amazing! So many of the Analog Africa releases have been top notch. It's that feeling once the music clicks... when you can't stop playing it. Love this album. Favorite track: Meu Barquinho.

Amy Brown I'll have this one on repeat for a while. So much greatness from Analog Africa! Favorite track: Coco Da Bahia.
more...

The city of Belém, in the Northern state of Pará in Brazil, has long been a hotbed of culture and musical innovation. Enveloped by the mystical wonder of the Amazonian forest and overlooking the vastness of the Atlantic Ocean, Belém consists of a diverse culture as vibrant and broad as the Amazon itself. Amerindians, Europeans, Africans - and the myriad combinations between these people - would mingle, and ingeniously pioneer musical genres such as Carimbó, Samba-De-Cacete, Siriá, Bois-Bumbás and bambiá. Although left in the margins of history, these exotic and mysteriously different sounds would thrive in a parallel universe of their own.


I didn't even know of the existence of that universe until an Australian DJ and producer by the name of Carlo Xavier dragged me deep into this whole new musical world. Ant it all began in Belém do Pará. Perched on a peninsula between the Bay of Guajará and the Guamá river, sculpted by water into ports, small deltas and peripheral areas, Belém had connected city dwellers with those deeper within the forest providing fertile ground for the development of a popular culture mirroring the mighty waters surrounding it. Through the continuous flow of culture, language and tradition, various rhythms were gathered here and transformed into new musical forms that were simultaneously traditional and modern.

Historically marginalized African religions like Umbanda, Candomblé and the Tambor de Mina, which had reached this side of the Atlantic through slaves from West Africa – especially from the Kingdom of Dahomey, currently the Republic of Benin – left an indelible stamp on the identity of Pará's music. They would give birth to Lundun, Banguê and Carimbó, styles later modernised by Verequete, Orlando Pereira, Mestre Cupijó and Pinduca to great effect. The success of these pioneers would create a solid foundation for a myriad of modern bands in urban areas.


Known as the "Caribbean Port", Belem had been receiving signal from radio stations from Colombia, Surinam, Guyana and the Caribbean islands - notably Cuba and the Dominican republic - since the 1940s. By the early 1960s, Disc jockeys breathlessly exchanged Caribbean records to add these frenetic, island sounds to liven up revelers. The competition was fierce as to who would be the first to bring unheard hits from these countries. The craze eventually reached local bands' repertoires, and Belém's suburbs got overtaken by merengue, leading to the creation of modern sounds such as Lambada and Guitarrada.

To reach a larger audience, the music needed to be broadcast. Radios began targeting the taste of mainstream audiences and played music known as "music for masses". As the demand for this music grew, it led to the establishment of recording companies. Belém's infant recording industry began when Rauland Belém Som Ltd was founded in the 1970s. It boosted a radio station, a recording studio, a music label and had a deep roster of popular artists across the carimbó, siriá, bolero and Brega genres.


Another important aspect in understanding how the musical tradition spread in Belém, are the aparelhagem sonora: the sound system culture of Pará. Beginning as simple gramophones connected to loudspeakers tied to light posts or trees, these sound systems livened up neighbourhood parties and family gatherings. The equipment evolved from amateur models into sophisticated versions, perfected over time through the wisdom of handymen. Today's aparelhagens draw immense crowds, packing clubs with thousands of revelers in Belém's peripheral neighbourhoods or inland towns in Pará.


The history of "Jambú e Os Míticos Sons Da Amazônia" is the history of an entire city in its full glory. With bustling nightclubs providing the best sound systems and erotic live shows, gossip about the whereabouts of legendary bands, singers turned into movie stars, supreme craftiness, and the creativity of a class of musicians that didn't hesitate to take a gamble, Jambú is an exhilarating, cinematic ride into the beauty and heart of what makes Pará's little corner of the Amazon tick. The hip swaying, frantic percussion and big band brass of the mixture of carimbó with siriá, the mystical melodies of Amazonian drums, the hypnotizing cadence of the choirs, and the deep, musical reverence to Afro-Brazilian religions, provided the soundtrack for sweltering nights in the city's club district.

The music and tales found in Jambú are stories of resilience, triumph against all odds, and, most importantly, of a city in the borders of the Amazon who has always known how to throw a damn good party.


"Jambú is a plant widely used in Amazonian and Paraense cuisine. Known for having an appetite-stimulating effect, it is added to various dishes and salads but is most famously one of the main ingredients in Tucupi and Tacacá, two delicacies that have been immortalized in countless Carimbó songs. Chewing the leaves of the Jambú plant will leave a strong sensation of tingling on the tongue and lips. Indigenous communities have relied upon its anaesthetic qualities for centuries as an effective remedy against toothaches and as a cure for mouth and throat infections. A decade ago, a distillery from Belém discovered the euphoric effects of the Jambú plant when combined with distilled sugarcane based spirit - known as cachaça - and created the now legendary "Cachaça de Jambú".

Many thanks to the Goethe Institut for supporting this project.