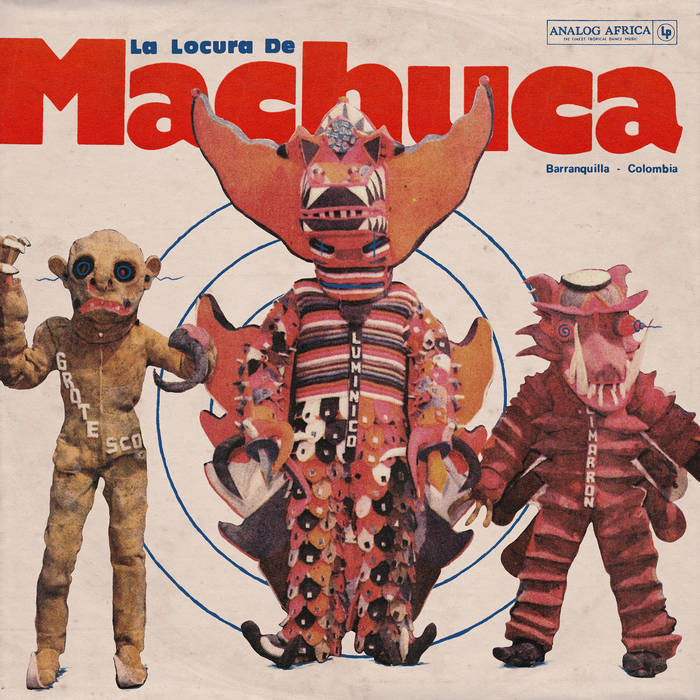 Sol Marianela This is and excellent and delicious compilation. If you dance to it, life changing things may happen to you! Favorite track: Wabali.

Vinushika Utterly infectious, yet also unclassifiable. A historical treasure of Colombia's picó culture, and also excellent music on its own right. Rafael Machuca was dedicated to making his own kind of music, and the unique sound of his production still stands out today. Favorite track: Long Life Africa.

oradur this is quite crazy stuff and i love everything extreme by any means necassary Favorite track: Te Clavo La... Mano.
more...

La Locura de Machuca is the story of one man’s bizarre odyssey into Colombia’s coastal music underground, and the wild, hypnotic sounds he helped bring up to the surface.

One night in 1975, a successful tax lawyer named Rafael Machuca had his mind blown in Barranquilla’s ‘Plaza de los Musicos’. Overnight he went from a high ranking position in the Colombian revenue authority to visionary production guru of the newly formed record label that bore his name, Discos Machuca, and for the next six years he devoted his life to releasing some of the strangest, most experimental Afro Psychedelia Cumbia and Champeta ever produced.

The Colombian music industry was thriving in the mid-seventies, but while homegrown bolero and vallenato tunes were doing well on the charts, it was imported African records that were setting crowds on fire at the picos – the sound-systems that fuelled neighbourhood parties – and wherever those records were played there were always a handful of groups who were inspired to plug traditional Cumbia directly into the electric currents coming from across the Atlantic.

It was these obscure bands, who fused Colombian and African rhythms with the swirling organs and psychedelic guitars of underground rock, that fired Machuca’s imagination. While the label made its money releasing popular hits by legends such as Alejandro Durán and Aníbal Velásquez, that money was poured back into a unique run of experimental releases by fringe artists such as La Banda Africana, King Somalie, Conjunto Barbacoa, and Abelar- do Carbono, one of the godfathers of Champeta Criolla.

When Machuca couldn’t find groups to realise his particular vision, he simply created them himself. Drawing on a fearsome roster of musicians associated with the label, he assembled bands that lasted only as long as it took to record an album, and unleashed the results – complete with arrestingly unusual album covers – under a series of different names such as Samba Negra or El Grupo Folclórico. This unorthodox approach led his longtime recording engineer, Eduardo Dávila, to describe Machuca’s productions as the “B-Movies of Colombian music.”

The story of Doctor Machuca and his eccentric exploits tells of one of Colombia’s most atypical and peculiar record companies; a defining pillar of Afro-Caribbean psychedelia. His productions have come to represent the roots of Champeta and set the pedigree standards for Afro and Costeño avant-garde. The seventeen tracks on La Locura de Machuca, harvested from the darkest, strangest corners of the Discos Machuca catalogue, sound like little else recorded before or since.