Legend Of Funaná (The Forbidden Music of The Cape Verde Islands) 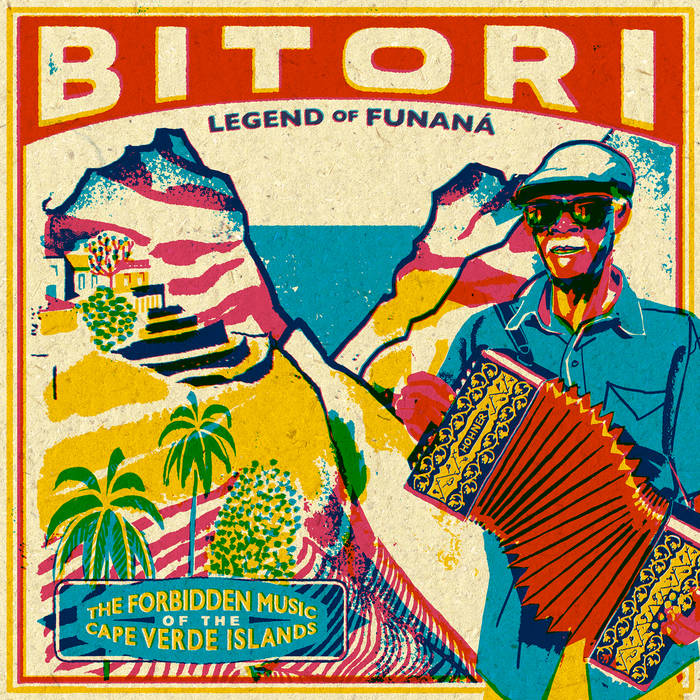 Mikely Blessed to see Bitori live at Rainforest festival in Borneo. The groove and energy from this music is addictive. Favorite track: Bitori Nha Bibinha.

G4000 I love this album, it makes me feel great. Funky bass lines and a thriving beat is making this album a killer. Favorite track: Bitori Nha Bibinha.

In 1997, a quiet, unassuming man of 59 years old named Victor Tavares - better know as Bitori - walks into a studio for the very first time to record a masterpiece which many Cabo Verdean consider to be the best Funaná album ever made.

Bitori's musical adventure had begun long before this point. It was 1954 when he embarked on a journey across the seas to the island of Sao Tomé & Principe. The young man's hope was to return to Cabo Verde with an accordion.

Following two years of hard labour Bitori had succeeded in saving enough money to acquire what was to become his most valued possession, his cherished instrument. The two month journey back to Santiago, his island of birth, proved time enough to master it. Self taught, Bitori developed his own style, an infectious blaze, that quickly caught the attention of the older generation. Before long Bitori was being asked to share his musical talents, igniting the local festivities around Praia with his music.

But not everybody welcomed the rural accordion-based sound. Perceived as a symbol of the struggle for Cape Verdean independence and frowned upon as music of uneducated peasants, Funaná was prohibited by the Portuguese colonial rulers. Performing it in public or in urban centres had serious consequences - often jail time and torture awaited musicians that were “caught in the act”. In light of such persecution the genre of Funaná began to slowly disappear.

In 1975 Cabo Verde achieved independence from Portuguese colonial rule. Along with Cabo Verde’s independence came a lifting of the ban placed on Funaná. The musical repercussions in Cabo Verde were plenty - many upcoming artists embraced Funaná, translating and adapting its musical form in new ways. It was not to be until the mid-1990’s, however, that Funaná in its traditional form was actually recorded.

It was a young singer from Tarafal, Chando Graciosa, who was to play a key role in this event. Upon hearing Bitori, Graciosa immediately felt drawn to Bitori's unique playing style - a raw and passionate sound accompanied by honest lyrics that reflected the harsh reality of the Cabo Verdean working class. He eagerly approached Bitori suggesting they join forces and travel overseas with the objective of taking Funaná beyond its rural roots. The two of them, with others in tow, achieved their goal and travelled to Europe, introducing a receptive European audience to the vibrant energy of Funaná. Eventually Bitori returned to his beloved Cabo Verde. Graciosa opted to settle in Rotterdam in order to pursue his career - he vowed, however, to bring Bitori across to Holland at a later date to record an album.

In 1997 the time was ripe to immortalise the sound Bitori had shaped over a time span of four decades. Built around a formidable rhythm section, formed of drummer Grace Evora and bass player Danilo Tavares, "Bitori Nha Bibinha" was recorded. The recording catapulted Chando Graciosa to stardom, making him Cabo Verde's No.1 interpreter of Funaná.

The success in Cabo Verde was phenomenal and Funaná rapidly gained the recognition it deserved, especially in urban dance clubs. Bitori's songs quickly became standards - classics known and loved throughout the country. The musical success, however, was solely limited to the Cabo Verdean islands - until now!
Analog Africa is proud to contribute to the worldwide promotion of Funaná - the once forbidden sound of the Cabo Verde archipelago - by releasing a worldwide re-issue of Bitori and Chando Graciosa's legendary recording.

The release will herald Bitori's first European tour taking place during the summer of 2016. Watch this space! And listen!

If you like Legend Of Funaná (The Forbidden Music of The Cape Verde Islands), you may also like: