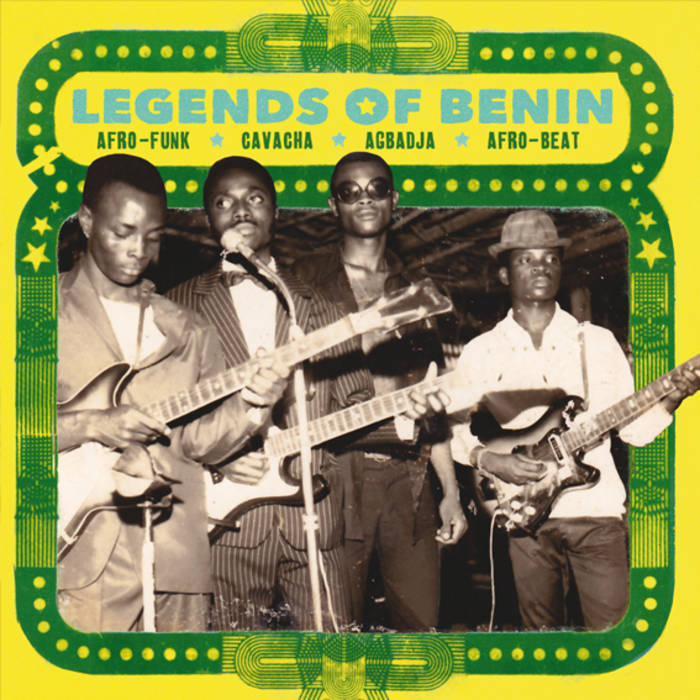 Tom Museth One day I will have every Analog Africa record. One day. Favorite track: Dadje Von O Von Non.

Cimarrón Glacé I love all the Analog's Africa releases. I didn't know very much about Benin's music, and this compilation is really groovy! Thanks! Favorite track: La Musica en Verité.

Each one of them with their own distinctive sound.
What you are going to hear here is a thick brew of Agbadja, Soul, Cavacha, Funk, Afro-Beat, AfroLatin Sounds all mixed in with Heavy Traditional Rhythms - distinctively Beninese Sound!

Gnonnas Pedro et Ses Dadjes - Le roi de l'Agbadja Moderne
Gnonnas Pedro had always excelled in many styles of music but if one had to associate him with a particular genre it would be Agbadja. Agbadja is a rhythm hugely popular in Togo, Benin and Ghana. Its based on three percussion, each one of them with a different tone. The 'epicenter' of that rhythm is a region called Le Mono, located in the Center of Benin and birthplace of Gnonnas Pedro. It's a rhythm used mainly during burial ceremonies. Gnonnas adopted and modernised it in the mid-60's calling it 'Agbadja Modern'.
It became his trade mark and he was soon dubbed 'Le Roi du Rhythme Agbadja'.
The track Dadje Von O Von Non was originally recorded in 1966 and is Gnonnas first modern rendition of Agbadja. Also featured here is the crazy kick-ass funk track Okpo Videa Bassouo recorded in 1973, as well as the sublimly contagious track La Musica en Verite.

Honoré Avolonto - Afro-Beat Beninois
Honoré Avolonto started his career 40 years ago as a percussionist. The young 'Tumba' player went onto become one of Benin most prolific composer. ' I was composing so many tunes that some producers would run out of cash and pay me with goods instead, I remember receiving a torch for a song once'.
Avolonto composer Benin's most successful LP (No Title - SAT 143) which was recorded for the Satel music Label in the late 70s. That album was recorded with the Black Santiago a band fronted by Amazing trumpetist Ignace De Souza, another Legend, with whom he recorded the Afro-Beat track Dou Dagbe We few years earlier (included here). Avolonto has fronted some of Benin's most powerful bands and some of those 'partnerships' with Orchestre Poly-Rythmo and Les Commandos are presented here.
Beware - Killer Afro-beat meets Frenetic Funk

El Rego et Ses Commandos - Cotonou Funk
In recent years El Rego et Ses commandos vinyl records have taken the Funk DJ scene by storm with some incredible stuff released on Albarika Store and Aux Ecoutes released in the early 70s. For at least a year my label was operating solely on money generated from El Rego records sold to Djs and collectors, so when I decided to release music from Benin, it was a natural that El Rego would be the first artist from that country I would seek to get the licensing rights for.

This compilation includes Benin's first afro-soul-funk track (call it what you like) recorded by El Rego with the support of a Ghanean singer Called Eddy Black Power. The 'Jerk' Scene in Benin was triggered by the success generated by the phenomenal song Feeling you got, which had an infectious accordion riff that did not seem to surprise anyone in Benin as musically anything was possible at the time. As a consequence Bands started composing tunes on the model of that song - Orchestre Poly-Rythmo de Cotonou being one of them, and that's how the crazy funk scene started. E Nan Mian Nuku is an Afro Latin tune combined with a kind of Bossa Nova. Lst but not least we've included Vimado Wingnan, Benin's most sought after Funk track and understandably so

Antoine Dougbé - Afro Cavacha
Orchestre Poly-Rythmo not only composed and recorded hundred of songs but they still found time to arrange and record for other artist, one of them being 'Le ministre du Diable' - Antoine Dougbé. From all the artists here, Dougbé is the least known even in Benin, but the quality and the power of his composition makes him my personal legend. One thing for sure, he created his own style which he dubbed Afro Cavacha. Its a fantastic mixture of Congolese Rumba, Latin Sounds and Traditonal Vodoun Rhythms - A crazy Melting pot if you prefere. And last but not least….never leave an Antoine Dougbé vinyl record behind, Especially not the ones released on his own label, Editions Dougbé Antoine. They are incredible and have become some of Africa's most sought after collector's item.

This compilation comes with a 44 page full colour booklet with ultra rare pictures and biographies. Enjoy the mind-blowing sound of Benin.

Dedicated to the memory of Morvan Piepho who died in Cotonou on February 15th, 2009. He was 32 years old.