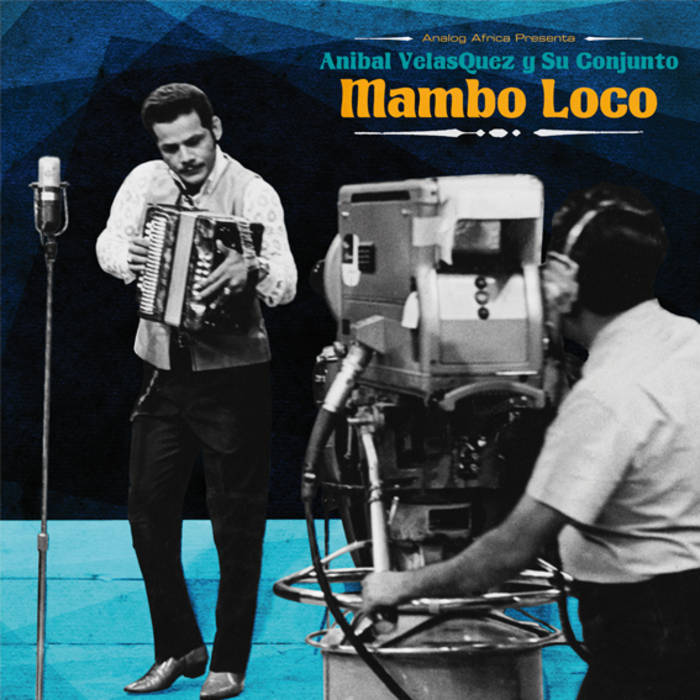 Having built its reputation on releasing long-forgotten gems from 70s Africa, especially Benin (including two releases by Orchestre Poly-Rythmo de Cotonou), Analog Africa is moving its focus to another continent altogether for release number 7: 'Mambo Loco' is a compilation of tracks by Anibal Velasquez, the legendary accordionist from Barranquilla in Colombia. In fact, when not crate-digging in Africa, Analog Africa founder Samy Ben Redjeb can often be found in Colombia. This coupled with the fact that many of the tracks presented here have become essential during Analog Africa DJ sets and have set fire to more than one dance-floor, means this new release has all the hallmarks of becoming another Analog Africa classic.

Nestled between the Caribbean Sea and the Rio Magdalena, lies the city of Barranquilla. Hailed by its locals as Colombia's 'Puerto de Oro' (Golden Gate), Barranquilla has served as a gateway for 'Caribbean Tropical Sounds' for almost a century. Home to the country's biggest cultural celebration, El Carnaval, and the birthplace of Colombia's radio and recording industry, Barranquilla has always been a city deeply rooted in musical traditions. Its port-city status has allowed its citizens to remain up-to-date with the latest grooves coming out of the Caribbean basin. With scores of LPs arriving from Cuba, the Dominican Republic, Mexico, Puerto Rico and the United States, the city also soon became a bastion for musicians and vinyl enthusiasts from all over the world. Nobody embodies Barranquilla's rich musical heritage more than the master accordionist Anibal Velasquez. Known affectionately by his fans as 'El Mago' (the Magician), Anibal has been one of the most prolific musicians of Colombia's Musica Tropical movement.

Anibal was born into a musical family in Barranquilla in 1936. His father was an accomplished musician but his biggest influence was his older brother Juan who first introduced him to the secrets of the accordion. Anibal remembers: 'I knew already how to handle the clarinet, the Guacharaca and other instruments, that's a talent I must have received from my father. In those days music was everywhere - people would come together and dance to cumbias and mapales … it was all very spontaneous. Barranquilla has always been a musical city, but when I started to play the accordion, the instrument was not very popular, it had not become part of Costeno (Colombian Caribbean coast) culture as it was considered a second-class instrument, a bit foreign and awkward, used primarily by campesinos (peasants) in rural towns off the banks of the Rio Magdalena - but we've changed that. One of the turning points was a chance encounter with Robertico Roman, a musician from Cartagena. We both had a deep love for Cuban music and he would often come to my place where we jammed. It was with Robertico Roman that I formed my first band called Los Vallenatos de Magdalena. I made my first recording with that band in 1952. Four songs were recorded including a track called 'La Gallina', which became a huge hit and really spread the costal sound toward the interior of the country.'

Unfortunately soon after, in 1955, band-mate Robertico died and Los Vallenatos de Magdalena had to disband. Without a band, Anibal was forced to take a job as a session musician for Barranquilla-based label Disco Eva working for a group called El Conjunto Colomboy. He remained with Disco Eva until the end of 1950s working closely with the great Costeno master Lucho Campilo. Then in 1960 Anibal formed a new group together with his elder brother Juan, a gifted musician in his own right, and his younger brother Jose who would soon become his right hand man, enabling Anibal to add a new dimension to his playing style. Jose himself began experimenting by incorporating new instruments and re-inventing old rhythms. He would break the rules and replaced the traditional bongos used in Cuban Guaracha and Rumba with a traditional Colombian drum called 'La Caja' which he modified by adding 'radiografias medicas' (x-ray film) over the drum. This - combined with Anibal's powerful accordion - was to become a sensation, generating a much harder and drier sound than the traditional leather skin drums.

Anibal's new Guaracha style was infectious, fast and furious, often leading his crowds into a state of frenzy. The interest for Anibal's new innovative sound started growing and recording offers were pouring in. Anibal was on fire and was entering his most productive period. 'It was a new style … we could not play traditional Cuban rhythms because some combinations simply did not work with the accordion … it was then that my trademark style emerged: the Guaracha de Anibal Velazquez. It was also at this time that I met Antonio Fuentes who had just started his label Disco Fuentes. I really enjoyed working with him because he understood the mind of the musician and gave us lot of creative freedom. Encouraged by his attitude I began playing different styles adapting regional elements to the accordion. I would play Cumbia, Merecumbe, Mapalé, Pompo and Corrido and later also began to incorporate Cuban and Puerto Rican elements into my music.'

His time at Fuentes' studios would be short-lived. The music industry on the coast was experiencing a boom with recording studios popping up everywhere - Anibal was soon recording on every label that existed: 'I didn't like to stick to only one label - they dubbed me 'Anibal Todo Sello' (Anibal all labels). It was in many ways the golden decade of the Musica Tropical movement. Lucho Bermudez and Estersita Forrero had taken the genre to new heights spreading the warm tropical sound of the coast to Bogota and reaching as far Cuba and the United States. I recall playing every week in a small venue called 'Mi Kioskito' here in Barranquilla and all the great musicians of this country would appear one after the other: Pacho Galan, Rufo Garrido, Pedro Laza, Michi Sarmiento … Costeno music was taking over the country and we were pioneering a new movement, a new identity for Colombia - those were amazing times.'

Anibal's Guaracha sound was spreading like wild fire and he began to have an impressive amount of followers, drawing huge crowds wherever he went. Alarmed by Anibal's great success and ability to sell records, Antonio Fuentes went on to create a new super group called Los Corraleros de Majagual, made up of many of Anibal's devoted followers such as Alfredo Gutierrez, Lisandro Meza, Ernesto Estrada (aka Fruko) and Calixo Ochoa to name but a few. But the rivalry between the two bands came to an abrupt end with the arrival of the drug cartels.

By the mid-1960s, music in La Costa began to change drastically. With the onset of the hippie movement in the United States came a craving for marijuana, and Colombia's Caribbean Coast had become a main trafficking hub. A new economy of drugs had emerged and with it a musical style called Vallenato rose to prominence. Its distinct accordion sound and bluesy appeal made it a favourite among drug lords and Mafiosos alike, becoming the soundtrack for their feverish life-styles. According to Anibal, 'for a short period, people found happiness in the new economy of drugs, and Vallenato had became the manifestation of this new found happiness.'

But this new brand of prosperity was soon followed by a dramatic upsurge in drug-related violence. Drug cartels ruled the streets and people did not feel safe. Life changed and so did the music. The drug lords delighted in the accordion and the instrument soon become a trademark in local festivals and public gatherings. 'I quickly began to redefine my playing style because I became bored with Vallenato, mostly because its lyrical content had become decadent and too closely associated with violence. So while everybody played slower to impress the drug lords I began to play faster.' By the 1970s the level violence in the coast had grown to unprecedented heights and Vallenato was everywhere. Fed up with this Anibal decided to move to Caracas, Venezuela, where he remained for 18 years until finally returning back to his beloved Barranquilla in the late 80s. 'Caracas was extremely good for me. I was able to focus on music and forget the madness of the coast. I made a lot of music in Venezuela, recording over 150 LPs.'

Anibal's contribution to Colombia's Musica Tropical Movement cannot be forgotten. It is said that Anibal Velasquez recorded 300 LPs throughout his remarkable career. His ability to play music that was joyful and percussive, with lyrics right out of everyday life, while at the same time championing a new sound, has made him into one of the few living legends of Colombia's glorious musical past.