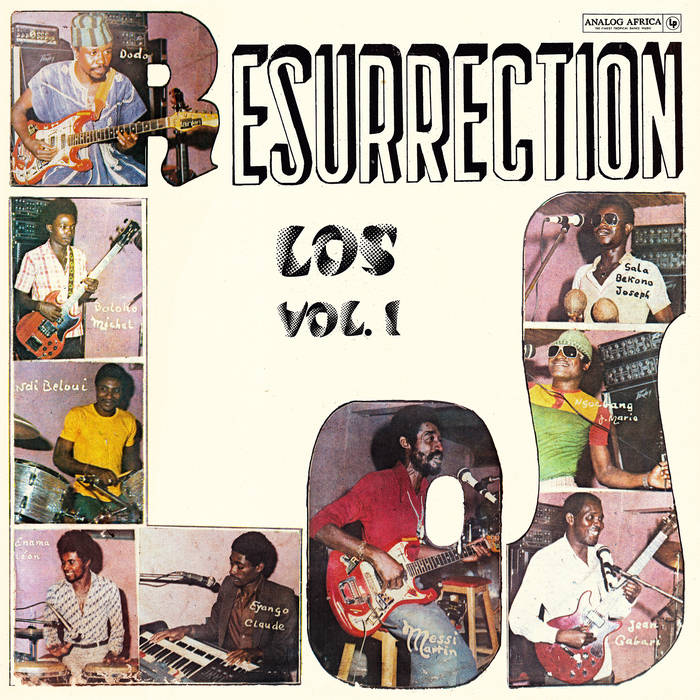 Todd Leiter-Weintraub Great reissue from this really wonderful Camaroonian (is that the right term for a band from Cameroon?) band. Insanely great electric guitar playing in that distinctive African style, with incredible polyrhythms. There are enough Western influences here that could make this easier on folks who are neophytes when it comes to African musical styles. But there is also enough here that is distinctly African that it can lead you down many other beautiful paths. I really love this one.

Pattrice Whenever this gets played at our house it results in a dance party. Favorite track: Resurrection Los.

* The electrifying final album from Cameroon's legendary Los Camaroes, available on LP for the first time since 1979.

* Recorded live to two track at the Mango Bar in Yaoundé, Resurrection Los was the last collaboration between bandleader Jean Gabari and groundbreaking guitarist Messi Martin.

* Deluxe LP reissue features notes on the history of the band by original keyboardist Mbambo "Johnny Cosmos" Simon, plus all new interviews with producer Nicolas Mongué and engineer Emmanuel Guyssot.

Cameroon, 1978: it's like any good western movie. A man drifts through the plains at the furthest edge of the country in search of two former gunslingers, hoping to coax them out of retirement for one last showdown. Except this time, the weapons are guitars and the gunslingers are Jean Gabari and Messi Martin – the calm sheriff and his hot-headed deputy – who had led the band Los Camaroes to superstardom at the beginning of the decade.

Los Camaroes emerged at the end of the 1960s from the town of Maroua in the northern, predominantly Islamic area of Cameroon. After changes in name, in lineup and in management, they worked their way south to the capital to make a name for themselves; in the span of only a few years they changed Cameroon's music scene forever, leaving a trail of sold-out nightclubs and monster radio hits in their wake. Then, at the height of their popularity, they broke up.

The band had been led from the beginning by Jean Gabari, whose level-headedness and even-handedness inspired the respect and devotion of his musicians. But it was Gabari's alchemical collaborations with guitarist Messi Martin that drove the band to its greatest heights. Martin had developed an innovation that would earn him fame throughout Cameroon as the "king of Bikutsi", as Johnny Cosmos explains:

"The primary instrument in Bikutsi is the balafon, and Messi came up with a trick that consisted of chewing small pieces of paper until they reached the right consistency and then stuck them between the strings of the guitar. This trick, which made a guitar sound like a balafon, catapulted him to stardom and turned him into the founder of Modern Bikutsi." (Check the song "Bezimbi" to hear Messi Martin´s wizardry on a Bikutsi tune)

Martin's extraordinary talents were matched by a character of great unpredictability. He had been lured away from the band before by the promise of success and, in 1975, when Los Camaroes were at the peak of their power, he left them once again. Gabari tried to keep the band going, but his own longstanding battles with ill health eventually forced him to return to his hometown. With Gabari and Martin gone, the rest of the musicians drifted away in search of other gigs. By 1978, Los Camaroes were no more than a rapidly fading memory.

But then came the resurrection.

From out of nowhere, a businessman named Atangana Joseph appeared in northern Cameroon. His goal: to track down the original members of Los Camaroes and get them back together for their one final shot at immortality. The musicians reconvened at the legendary Mango Bar in the capital city of Yaoundé, the very place where, years earlier, they had established their reputation as one of Cameroon's most fearsome live bands.

Producer Nicolas Mongué and engineer Emmanuel Guyssot were called in from Douala to record what was being billed as a comeback album. There was talk of going into a studio, but Los Camaroes had always thrived on the energy of the nightclub scene; they decided instead to record it live to two-track in the Mango Bar.

The six tracks on the album were performed by a mixture of new recruits and veterans from the original Camaroes lineup – including Mpouli "Dodo" Emmanuel on Guitars, Boloko Michel on Bass, Eyango Claude on Organ, the percussion duo of Ndi Bellui and Enama Leon, and vocal contributions from Sala Bekono Joseph and Ngoebang Jean Marie – but the urgent rhythms and shimmering guitars sound like a band who simply picked up where they had left off. It seemed that everyone on the record was inspired by the exhuberant reunion between Martin and Gabari, the two magicians from which Los Camaroes had been born and born again

The album, Resurrection Los Vol. 1, was completed in only a few days. There would be no Volume 2. The music that emerged during the Mango Bar sessions was the culmination of a fifteen year musical bond between Gabari and Martin, and what was supposed to be a comeback album ended up being a last testament — Gabari would die only a few years later and Martin, without his foil, would never find the same level of musical success. Even at the time, these two titans of Cameroon's music scene seemed to realise it would be the last time they would ever work together. The resurrection of Los Camaroes was short-lived … but it produced a masterpiece.

The Analog Africa Dance Edition reissue of "Resurrection Los" was designed by Kathrin Remest and remastered by Frank Merritt at the Carvery and comes with a wonderful poster housed in a deluxe gatefold sleeve featuring the story of the band as told by original keyboardist Mbambo "Johnny Cosmos" Simon, as well as new interviews with the production team who supervised the now legendary Mango Bar sessions. This essential slab of Cameroon's musical history, previously unreleased outside of Africa, is available on LP for the first time since 1979.