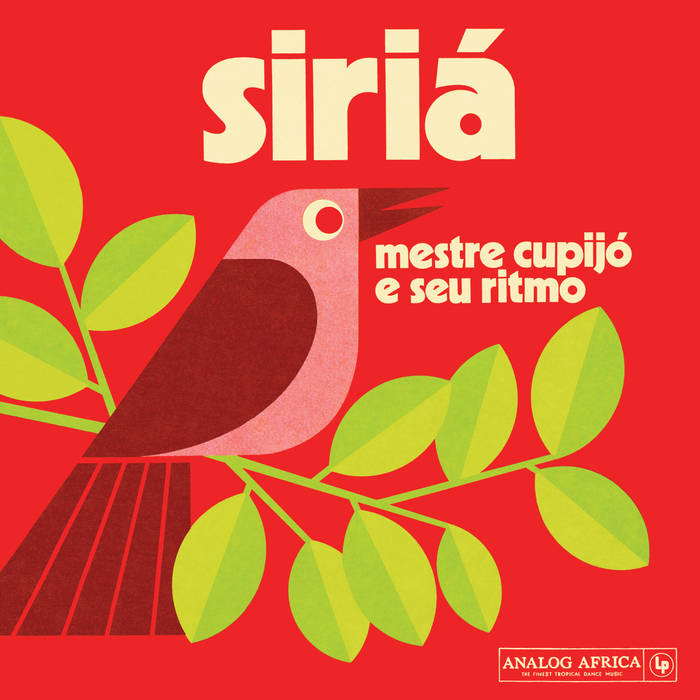 jimbo Lovitsz It goes straight to the heart .. u can feel it .. love it . Favorite track: Caboclinha Do Igapo.

Tom Studdy Analog Africa are back at it again. This label continually releases consistent quality. Siria is most certainly no exception.

Andrew Jervis Another super duper release from Analog Africa. This time they've gone further afield, and are digging around in the north of Brazil for African influenced music. There's a big comp coming, but in the meantime check out this collection of raw n'dusty tunes from Mestre Cupijo.

cocoloco79 Wow. Very seldom i find such great music out of nowhere!!! Knew i would buy this after a few seconds... GIve it a try...

Cametá, a historical little Amazonian town on the shores of the river Tocantins, is the birthplace of the scorching music known as 'Siriá'; a cross pollination between the music of the inhabitants of the quilombos, a Brazilian hinterland settlement founded by escaped slaves of African origins, and the indigenous people of the Amazon rainforest. It is a breathing, pulsing, emphatic beat, and the modernised version of this local music, created by Mestre Cupijó, has been igniting street parties and traditional festivals across the state of Pará in Northern Brazil for decades. And at last in 2014, the combustible sound of Siriá will be celebrated internationally as the feverish, tropical sound of the summer!

Foretelling his talent to flow between cultures, Cupijó was named after the local river where he was born into a family of musicians. His father, Mestre Vicente Castro, was also known as Mestre Sicudera, the musical director of one of Brazil´s oldest bands, Eutepe Cametaense. Eutepe Cametaense, formerly directed by Cupijo’s grandfather, was founded in 1874, arguably making them the oldest band in Pará, and possibly in Brazil. They had the heritage and recognition of being the only band that performed at the festivities that signaled the end of slavery in Pará in 1888. Cupijo would later adopt this band and it’s players after his father, as his birthright.

At 12, Cupijó started to play the clarinet. He also became proficient at the piano, mandolin and guitar, although the instrument that came to personify his sound was the alto saxophone.
Waltz, bolero, cha cha cha and an assortment of dance hall music became part of Cupijó's repertoire, but it was Carimbó and Siriá, the music played by the black communities of Pará, that had the strongest impact on the young musician.

To grasp the soul of this music, Cupijó went to its source and lived with the quilombolas (maroon) community of the Amazon. Upon his return, enriched by this life-changing experience, he founded the band 'Jazz Orquestra os Azes do Ritmo' with the goal of reinventing Siriá and modernising Samba de Cacete, Banguê and other folkloric music of the state of Pará. Airwaves from the Caribbean and Latin America had also brought the cumbia sound of the mighty Colombian orchestras, Merengue from the Dominican republic and Cuban music to the Amazon, all of which had an impact on the music of Northern Brazil, Mambo especially! Mestre Cupijó took these influences and mixed them in with the ingredients he had studied in the Quilombos. That fusion - as we are witnessing on this record - had explosive effects.

His fresh new sound became the soundtrack to Cametá's legendary Carnival and soon his troupe were invited to other festivals along the river. Transportation to these concerts was via small boats, where three or four musicians would share a vessel with their instruments tucked between their legs. In those days there were no posters or radio adverts to promote the shows in any way, yet Cupijó's shows became notorious. In an interview one of his band members explains: 'Whenever there was a party - on a Saturday for example - and it was known that Mestre Cupijó would play, the news would spread incredibly fast, just by word of mouth. We didn't understand how that was possible, but it certainly was amazing.'

After the initial wave of enthusiasm, the first two LPs were recorded with rudimentary equipment in a dance club in Cametá. However, it was the third attempt, recorded in a studio in Belém, which would trigger a phenomenal success. 'Caboclinha Do Igapo' and 'Mambo do Martela', included on this record, became instant hits. A year later, 'Mingau de Açai', one of Cupijo´s most popular tunes, took the region by storm. In total six LPs were recorded by Mestre Cupijó.

He then created 'Concurso de Musicas Carnavalesco de Compositores Cametaenses', a contest for carnival music composers. The songs composed expressly for these contests in the 70s are still performed today during carnival season. In addition to evolving the Pará music culture in this way, he also owned a makeshift soundsystem, 'Musicolor', to spin the discs of local artists before his own shows to the frenzied crowds. Mestre Cupijó proved himself a philanthropist as well as a conductor for the people's music, and acted as a provisional lawyer for the city of Cametá, specialising in help for the poor. He also had a short spell in politics and was elected by a vast majority to the station of Municipal Councillor of Cametá.

Master Cupjó, the pillar of Pará's festive culture, and a humble pop icon who was ushered prominently into the country's history books, passed away on 25 September 2012, at the age of 76.

His compositions as true anthems of life and vitality, vibrantly encouraging all to drink and dance until sunrise! Let go of your inhibitions and immerse yourself in the wonderful world of Mestre Cupijó... Segura!!!