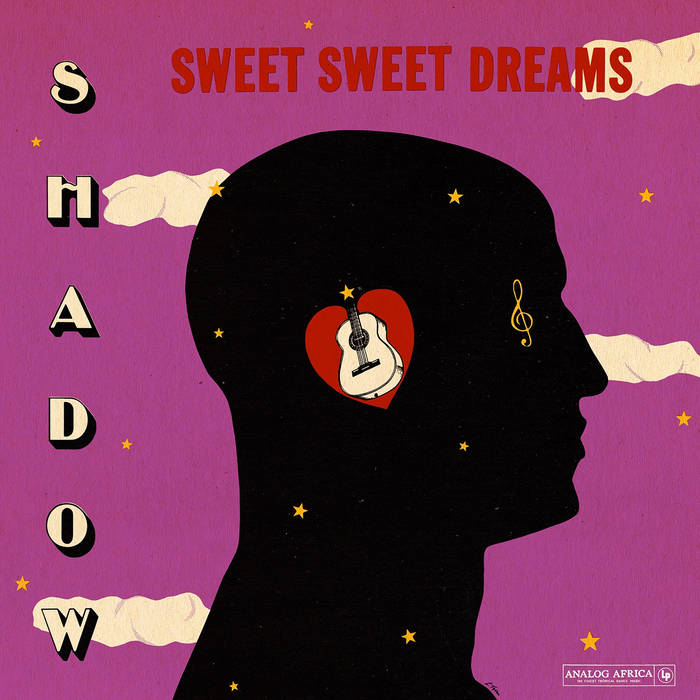 Slachs Let's Make it Up and Let's Get Together make for the price of admission alone. Unique rhythms and sounds and tasteful synths give this a funky dance floor authority, A very different addition to the Analog Africa canon and no less funky for it. Favorite track: Let's Make It Up.

Paul Ish This is simply one of the best LP I've ever heard. All my respect to Shadow and Analog Africa for their incredible work. Favorite track: D'Hardest (12" Version - Bonus Track).
more...

It’s November 5th, 2106. The generally crackly phone connection between Dublin and Port-of-Spain, the capital city of Trinidad and Tobago, was as good as I’d expected it would be. I’d finally managed to “hook” the legendary Shadow - also known as Mighty Shadow - whose very first sentence in a thick Trinidadian accent was; “I take my guitar and strum and sing some tings and blow people’s mind. But I ain’t trying to do anybody’s music. I’m doing what I feel”.

When it came out in 1984 the far-out album Sweet Sweet Dreams by Trinidad & Tobago’s Shadow (aka Winston Bailey) was described as “way ahead of its time”. Undeservedly it was panned by critics and, unable to reach markets, disappeared into the dusty record collections of a few music aficionados. Now, more than three decades later that cosmic dance-floor UFO is about to take off again, change all that and set the record straight. Remastered and cut by Frank Meritt at The Carvery the album is truly a masterpiece.

But who is this Shadow behind Sweet Sweet Dreams? Shadow is a man of understated magnitude. A truly enigmatic artist, he first emerged in Trinidad and Tobago during the 1970s, becoming a part of the tapestry of Caribbean music and reinvigorating calypso at the time. Calypso, the indigenous folk music of Trinidad and Tobago, has roots in West African kaiso rhythms, French Creole influences, and the hardships endured by the African slaves brought to Trinbago, whose descendants still use it as a tool for satire, self-expression,  and social commentary. Calypso has also given birth to several other music genres, including soca, with its uptempo beats and festival context. Shadow effortlessly moves between both.

Shadow came from a humble but musical family and started writing songs as a youth while tending cattle in the fields. To his family’s initial chagrin he chose calypso over church music but his talent and drive were undeniable. In the early days of his career Shadow’s style was cramped when working with some of the more conservative music arrangers who felt that calypso and soca should fit a mould. But after a while Shadow teamed up with more innovative arrangers, including Arthur “Art”de Coteau, who followed their and Shadow's intuitions resulting in a long line of hits.

“The first time we met for me to arrange his music we had a heated argument on the arrangement for one of his songs; I was theoretically correct but Shadow was musically right. Shadow broke all the traditional musical rules and made his own and that made him a musical giant. He changed the face of Calypso music in 1974 with the release of "Bassman" a tune in which Bass and magnificent horn line took central stage changing Soca music for ever. What Shadow did with his music was to put calypso on the International Dance circuit, giving it a totally different groove. You could take his music and swing it in any direction; Disco, Pop, Calypso, you name it. His music was different from anything that existed before”.  - Carl "Beaver" Henderson, one of Trinidad's veteran producers.

This inert creativeness culminated in Sweet Sweet Dreams which was arranged by Shadow and deals with burning and ever-relevant themes like love and the ups and downs of relationships. a surprising fact for someone mainly known for his satirical and political lyrics. It prompted his manager to wonder if Shadow had written the lyrics while in a state of ‘tabanca’ (a word used in Trinidad and Tobago to describe lovesickness).

Sweet Sweet Dreams was recorded at the legendary SHARC studios, located on a hill in Chaguaramas (near Port of Spain) and despite a fantastic sound and monster Soca-boogie tunes like “Lets get it together”, “Lets Make it Up” and “Way, Way Out” the album was a commercial flop, probably due to the fact that it didn’t sound like anything else coming out of Trinidad & Tobago at the time: It fused a range of different rhythms and new sounds, primarily heavy synth riffs.

Shadow took the album’s lack of success in his stride with usual aplomb:
“When I did Sweet Dreams I expect something could happen. But nothing big happen because I have no big market and no distribution and all this thing now. So I just cool myself and move on to another song. I wasn’t doing just one song. I used to always have plenty songs at the one time. And be writing music”.

What Shadow didn’t realise back then was that the proto-electronic cocktail he had mixed in 1984 would only find the recognition it deserved three decades later. Life has swung full circle: Sweet Sweet Dreams has come true and been elevated to holy grail status becoming one of the most sought-after Caribbean disco records in existence. Asked about this turn around Shadow mused  “I’m trying to understand that part. A lot of people ask me for it over a few years now. But I never give anybody it. That music wasn’t for then. It’s for now”.

For this re-release we carried out extensive interviews with Shadow and the musicians and have included as bonuses exclusive photos from Shadow’s personal collection.

Long live the “The King from Hell” !