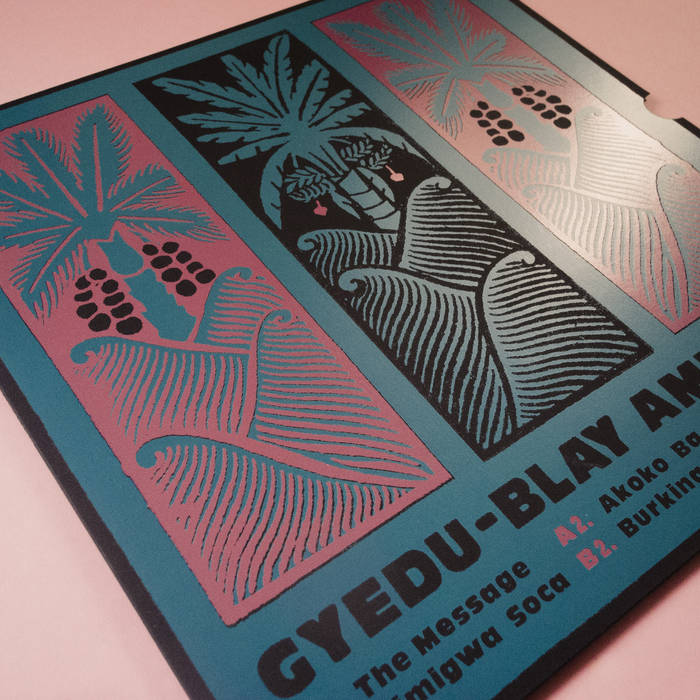 Tim Mee An exciting, hypnotic and classy mix of William Onyeabor and Fela Kuti. Keyboards drive side A but the terrific ‘Simigwa Soca’ the brings in side B reveals the drums and highlife horns taking over to accompany this man’s amazing baritone vocals. Funky Ghana! Favorite track: Simigwa Soca.

Prepare yourself for new directions in Afro-funk. During the 1980s, ghanaian bandleader Gyedu-Blay Ambolley began to experiment with electronic instruments, and the result was a potent cocktail of highlife, funk, exploratory synths and righteous vocals, the sound of a restless genius intent on pushing the traditional sounds of highlife into a brave new future. On July 20 Analog Africa will release a 12” containing four of Ambolley’s hardest-driving excursions to the outer limits of eighties funk.
By the end of the 1970s, Ambolley was already a legendary figure on the ghanaian music scene. A drummer, turned guitarist, turned bassist, turned lead vocalist, he rose to prominence during the late 1960s, serving with countryman Ebo Taylor in the Stargazers and the Uhuru Dance Band before launching his own career with ‘Simigwa-do’, the 1972 hit that propelled him to West African stardom. As a founding member of the Apagya Show Band and the Complex Soundz, he stretched the boundaries of highlife with electric instruments, funky rhythms and socially charged lyrics in Fante and English.

If he had retired in 1978, Ambolley’s place in the history of ghanaian music would have been secure. Instead, he dissolved the Complex Soundz and embraced the synthesizer. With a new band, Zantoda Mak III, he recorded ‘The Message’, a seven minute funk workout built on a highlife foundation, and decorated with shimmering synths. Recorded in 1980, the song became a hit that would change the direction of Ambolley’s music: over the next decade, electronic instruments played a much larger role in his sonic experiments.

‘The Message’ receives a long overdue re-release on this 12" along with three other peaks from Ambolley’s eighties output. The futuristic funk of ‘Akoko Ba’ strips down the rhythm, raises the intensity of the vocals, and adds a dose of serpentine saxophone. On the B-side, ‘Simigwa Soca’ sets classic highlife horns against an unshakable bass groove, while the incredible ‘Burkina Faso’ is Ghana’s great lost electro-funk gem, a sleek construction of robotic bass, call-and-response vocals, and fat stabs of slippery synth.

Difficult, if not impossible to find for decades, Analog Africa is proud to make Gyedu-Blay Ambolley’s extraordinary eighties recordings available to a wider audience.