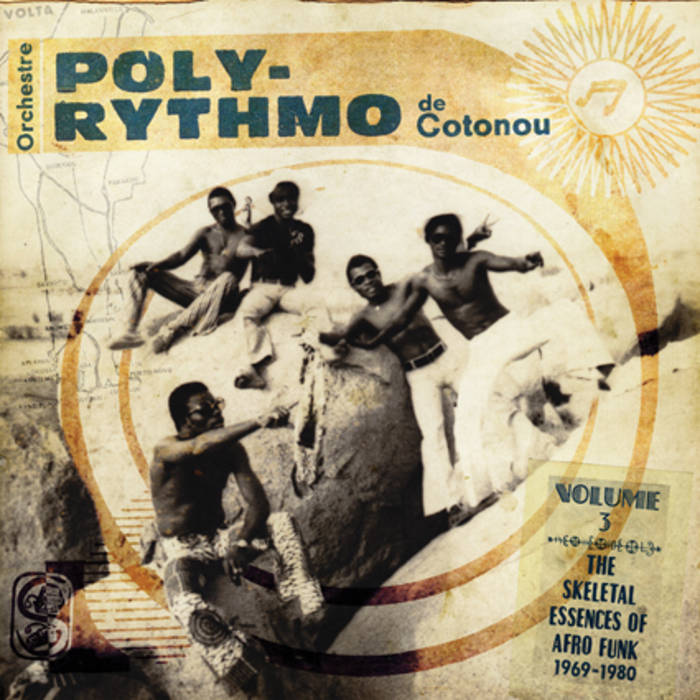 all the stores are closed

all the stores are closed This record is a masterpiece! The rhythm of Adjro Mi is soooo tiiiight! Favorite track: Adjro Mi.

Take funk, soul, psychedelia and rumba, mix it up with a thick dose of heavy local rhythms and throw everything in a Benin grinder. The brew is then mixed up with hypnotic Farfisa solos, gritty guitar riffs, distorted bass lines, warm horns and the result, of exorcizing proportion, will lead to frenetic body movements. Some people bang their heads, others jerk their feet or feel an urgent need to get up and start shaking their hips.

One thing is common, though, to everyone who submits their ears to a spinning record by the mighty Orchestre Poly-Rythmo de Cotonou: you simply can't stand still. And this new compilation is proof of that - here are 14 funky tracks by the legendary ensemble from Benin that has been deemed as 'West-Africa's best kept secret,' or as the 'The D.N.A. of voodoo groove'.

Following two previous Poly-Rythmo collections released by multiple award winner label Analog Africa - 'The Vodoun Effect' (2008) and 'Echos Hypnotiques' (2009) - this third compilation is another proof that our ears are facing 'One of the Funkiest bands in the world'.

Starting in 2005, Samy Ben Redjeb, Analog Africa's founder and compiler, made several trips to Benin, where he dug up most of the orchestra's output recorded between 1969 and 1983: hundreds of vinyl records and a few master tapes, in a total of 500 songs! With all that material in hands and the astonishing richness of the group's meterial, choosing the songs proved to be a tough task. Therefore, it seems only natural that it has taken a few years for this third volume to come out of Analog Africa ́s sonic treasure trove.

The 14 tracks presented here have never been issued outside of Africa and most of them follow the spirit and sound of the first volume, 'The Vodoun Effect,' which was a selection of songs released by small and obscure labels from this tiny country which was once known as Dahomey. Some of the songs presented here were recorded using a legendary piece of equipment, a Swiss made Nagra reel-to-reel recorder and one or two microphones, in private houses or open air gardens, mostly at night. And still, it would be somewhat difficult for contemporary musicians and engineers to achieve the stunning quality of raw sound and the atmosphere obtained in these recordings, even if they booked the most modern and expensive studios out there today.

One thing that immediately catches the attention listening to this compilation is the band's steamroller-like grooves employed by Gustave Bentho, the mythical bass master, and Leopold Yehouessi , the fantastic drummer of the band - for many, Africa ́s funkiest rhythm sections. The power lying in these tunes is phenomenal and shows true craftsmanship on both the composition and the production side, 'Houton Kan Do Gome', composed by Bentho, would have made James Brown proud. 'Ecoutes ma Melodie' is destined to become a classical late night tune for the many amazing tropical and afro parties taking place around the globe. 'Pourquoi Pas?' and 'A O O Ida' would be the kind of sound The Meters would have created were they born in Benin.

On December 17th, 2012, only a few months before this release, Melome Clement, the man who formed the all-powerful orchestra, passed away victim of a heart attack. The 'boss', as the other band members would tenderly call him, will be missed, but not forgotten. The soul of the music he created has permanently engraved itself in the soil of Benin.