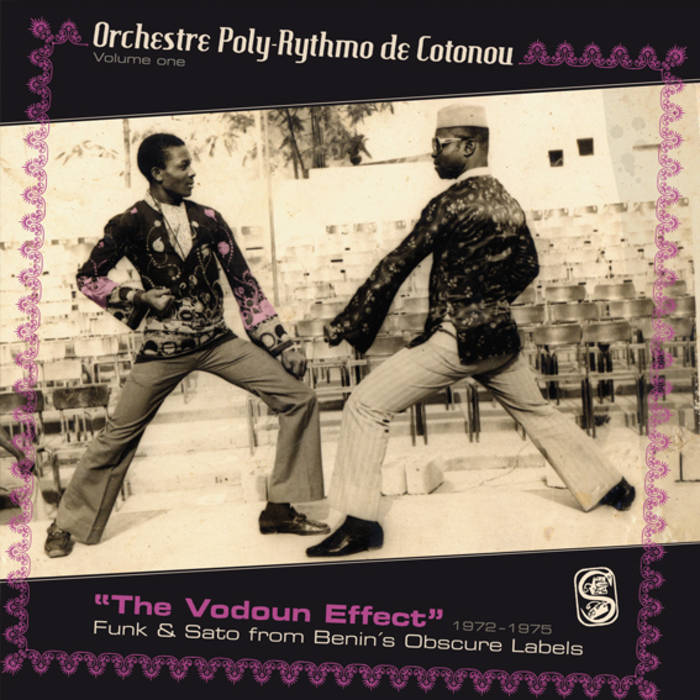 Rudy Carrera Such energetic, beautiful music that makes one want to jump up and dance. This album is damn near flawless. Favorite track: Mi Ni Non Kpo.

Orchestre Poly-Rythmo de Cotonou is arguably West Africa's best-kept secret. Their output, both in quantity and quality, was astonishing. During several trips to Benin Samy Ben Redjeb managed to collect roughly 500 songs which Orchestre Poly-Rythmo de Cotonou had recorded between 1970 and 1983. With so much material to choose from Samy Ben Redjeb decided to split it into Volume 1 and 2.

While Volume 2 will be material the band recorded under an exclusive contract with the label Albarika Store, the band also 'secretly' recorded with an array of smaller labels based around Cotonou, Benin's largest city, and the capital city of Porto Novo. It is those tracks (all officially licensed) that are presented here on Volume 1.

The producers of those labels were genuine music enthusiasts, some of them, ran these labels as a part time occupation, with very limited budgets. They couldn't afford high-quality recordings - all they had to work was a Nagra (a Swiss made reel-to-reel recorder) and a sound engineer - courtesy of the national radio station. These sessions were recorded in private homes using just one or two microphones.

The cultural and spiritual riches of traditional Beninese music had an immense impact on the sound of Benin's modern music. Benin is the birthplace of the Vodun religion (also Vodoun, or, as it is known in the West, Voodoo) and involves the worship of some 250 sacred divinities. The rituals used to pay tributes to those divinities are always backed by music. The majority of the complex poly-rhythms of the vodun are still more or less secret and difficult to decipher, even for an accomplished musician. Anthropologists and ethnomusicologists agree that this religion constitutes the principal 'cultural bridge' between Africa and all its Diasporas of the New World and in a reflection of the power and influence of these sounds many of the complex rhythms were to have a profound impact on the other side of the Atlantic on rhythms as popular as Blues, Jazz, Cuban and Brazilian music.

Two Vodun rhythms dominate the music of Orchestre Poly-Rythmo: Sato, an amazing, energetic rhythm performed using an immense vertical drum, and Sakpata, a rhythm dedicated to the divinity who protects people from smallpox. Both rhythms are represented here mixed in with Funk, Soul, crazy organ sounds and psychedelic guitar riffs. Bandleader Melome Clement explains: 'Sato is a traditional rhythm derived from Vodun. It is used in Benin during annual rituals in memory of the dead; you can't just play Sato at any given time. Sato is also the name of a drum which is used during the ceremonies. It's huge: about 175 centimeters high. The drummers, armed with sticks, dance around it and hit it all at the same time. It's very coordinated. The Sato drummers are backed by an orchestra of smaller drums and shakers. We also did some modern versions of a Vodoun rhythm called Sakpata. 'Mi Ni Non Kpo' and 'Houi Djein Na Da' are Sakpatas, which in Fon means 'god of the Earth.'
In the 44-page booklet, full of rare photographs and record covers, Analog Africa introduces three important producers who were collectively responsible for some of the most amazing music released in Benin: Gratien K. Aissy of the Echos Sonores du Dahomey label, Bernard Dohounzo of Disques Tropiques, Lawani Affissoulayi of Aux Ecoutes, the label behind El Rego & Ses Commandos's fame, as well as en encounter in Niamey with Honliasso Barnabé, Poly- Rythmo ́s Producer in Niger.

Samy Ben Redjeb also interviewed Vincent Ahehehinnou, the man responsible for composing some of the funkiest stuff ever to come out of Benin, and Kineffo Michel, the sound engineer of Poly-Rythmo's legendary Nagra 'home' recordings.

None of these tracks (except one - Track 14) has been distributed outside Benin before. These obscure coastal labels had a small distribution range, that barely reached beyond the outskirts of Cotonou or Porto Novo. Because of financial considerations most, if not all, of these recordings had very limited pressings that rarely exceeded one thousand copies total and many labels rarely produced more than 500 copies of any given record.

The music in this compilation is not only rare, but illustrates how Orchestre Poly-Rhythmo with the support of a number of local record labels, thrived by mixing the coolest parts of funk, soul, latin and vodun rhythms into a new sound that not only reflected the musical culture and heritage of Benin, but also transformed it and turned the small country into such an incredible musical melting pot.

This fourth Analog Africa release of forgotten musical gems from 70s Africa was once again lovingly compiled by label boss and vinyl collector Samy Ben Redjeb, driven by the wish to keep this extraordinary music alive.